The tour has just started and we are here for “ROCK ON” with Kamelot, one of the best bands broadcasted at our program since…how many years, Thomas?
TY: I think at least 25? Maybe the last 5 …

…and you are on Tour again. How is it going so far?
TY: Mh yeah, it’s going great, we just started three days ago, I guess. We played first in Paris, yesterday we were in Cologne, today at famous Z7 here in Switzerland

One of the best venues in Europe…
TY: Great stage, great lights, catering, great fans, so we are excited!

Which is the worst date on a tour – the first, the second evening, the third evening? When are you at your best?
TY: Ehm, I don’t know. It’s hard to say. kind of just depends but…we thought that the first show was gonna be rough, because we had no time to rehearse, we have new songs that we are playing. But the show went great, you know. I think as long as you prepare before you leave and you meet with everybody… that’s the key.

This time Tommy didn’t fly to the USA to rehearse for this tour, did he
TY: No, no we have been so super busy with everybody’s schedule at home. Just as me: I have kids, school just started so I am driving kids to school in the morning and basically taking care of that kind of stuff. We kind of got to that point where we can just meet at the first show and have a long soundcheck and it makes sense.

And the best date on a tour usually is the last one as you come back home?
TY: Eh, it is a bitter sweet day of course. It’s the last show and usually we have a big venue with the big production – like we’re gonna be at Tilburg so we have pyros, and stuff like that. And of course everybody is excited about coming home and seing families – so it is bitter sweet – but it is always one of the best shows on the tour.

Of course you have to promote the new album. How is it going?
TY: It’s going great. I mean the record. We have been very fortunate with „Silverthorn“ and now „Haven“ – that they are eclipsing the previous records in sales and everything. We see a whole new fanbase that scraped up in addition to the fans we have already had. One of the big goals for me with „Silverthorn“ was to continue the Kamelot legacy but also to grow, and we are gonna have to do that.

Yeah! In fact I saw many new people, a whole new generation at your concerts. I am happy about this. You don’t belong anymore to the old generation…as me… (laughs).
TY: If you think about it even ten years ago, we always had a great mix of fans, from 13, 14 year olds to 50 years olds. We are fortune I think that we make music that can appeal to different generations and different genres lovers

Producing the new album, have you changed something or did you work as usual: you as a mastermind? Or did you involve Oliver and Tommy more in songwriting, for example?
TY: Yeah, that was very similar to „Silverthorn“. Oliver and I worked very close together. And he’s getting more and more into producing, as well. And Sasha (Paeth ndr) also was the producer, but this time we had Jacob Hansen who did the mastering for the album. I think that he gives it a little different sound, a little bit heavier punch than maybe „Silverthorn“. So it was similar process to „Silverthorn“ but I think we took it up another level.

Are you still keeping the Live tracklist dedicated more on the last album with some old song? Do you change it every night?
TY: It’s very heavy „Haven“ and „Silverthorn“ – that, to me, makes sense. It’s a new era for the Band. Of course we still play „Karma“ and songs like that. We switched the set up quiet a bit though on this tour. We don’t open with the normal song, we don’t close with the normal song that people are used to – so it’s something that probably we should have done a couple of years ago but I’m glad that we have decided to finally start changing the set up a little bit. Making it interesting for ourselves and not just for the fans. 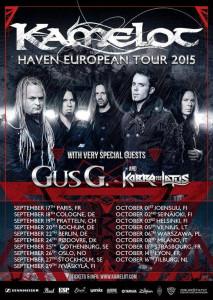 If I am not wrong you started in London with two new songs from the new album, didn’t you?
TY: No I think it was just „Veil Of Elysium“. It was in April, the record didn’t come out until May – so we played it a little bit before it came out, which I wasn’t sure about doing it. But I am glad we did and it went all for good. We can’t wait to go back to the UK actually. I’m hoping that we can do that the next april. To do like more than just one show, do like 3 or 4 shows in the UK.

Indeed, this is only the first leg of the tour…
TY: Yeah. Right now we’re looking for any dates for April, mid / late April 2016. We only confirmed the Karmøygeddon Metal Festival in Norway on 29th April, than we probabily do Trondheim. But before that we’re looking at Prague and Vienna for example.
Maybe Trieste …

Which chorists/guests (female voice) will be on stage this time?
TY: We have Vanja Wikström with us, she is also the singer from Therion. She’s just amazing, she can do anything. She can sing all the parts that we have, she can also growl – and she is just a fun person to tour with, she’s crazy. So she is doing that. Alissa (White-Gluz ndr) is gonna meet us in Japan for the show at the „Loud Park Festival“ because her band (Arch Enemy ndr) is already gonna be there. And next year we don’t know. That is one of the reasons I never added a female role to the band because I like to have that freedom.

I think you’re number one in choosing girls and openers. You never chose a wrong one, you never made any mistake…
TY: Oh! I mean: Hopefully I have a good ear and an eye for talent. I like to think that growing up as a James Bond fan was probabily good practice for that.

Next stop of the tour will be the „Loud Park Festival“. It is gonna be the first time there for Kamelot, if I am right.
TY: First time for us at „Loud Park“, yeah. We have gone to Japan for quite a few years, but this is the first time at „Loud Park“ – which is a whole new audience for the band. Hopefully next year, maybe like June, we go back to Japan for a headliner Tour. We are gonna do the second leg of the US tour and November, December, again we’ll bring „Dragonforce“ as special guests. They are a lot of fun to tour with, really nice guys.

This time you’re touring Europe again with „Gus G“.
TY: Right now we’re touring with „Gus G“ and „Kobra and The Lotus“ as the first band. Both bands are killer! Really, really. And nice people.

Do you choose bands everytime personally?
TY: Yeah, with Gus, I’ve known Gus for years, with „Firewind“ and he also has been on one of our albums. „Kobra and The Lotus“ I just found out about because my buddy Bill Hudson is the guitar player with them. So I thought they will be interesting for the Europeans to check out because they haven’t done a whole lot of stuff out there.

Do you think about doing another videoclip?
TY: Yeah. When we’re doing „Loud Park“ we’re probabily going to videotape the whole show so maybe there’ll be some live stuff. Maybe „Revolution Live“ or something like that. I would like to do a full video of „Revolution“ but I’ve to talk to Napalm Records, get them to pay for it and than we can make it happen. If the fans haven’t got „Haven“ yet – make sure you do. We are really proud of it.

Next year in Trieste, on 8th October you’ll be in Milan. Do you want to say something to your Italian fans?
TY: It has been a long time I think since we played in Milano. So we’re all excited about coming. Everybody there better come or never come back again (laughs). We will do Triest only. 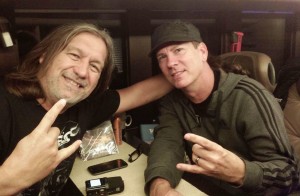 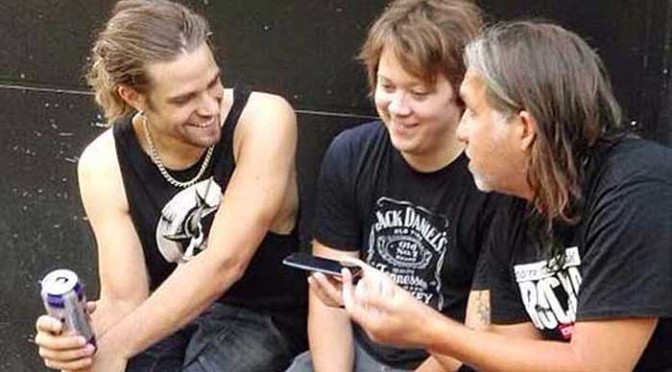