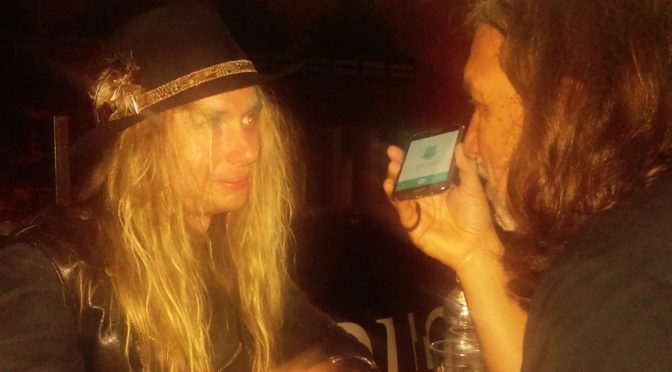 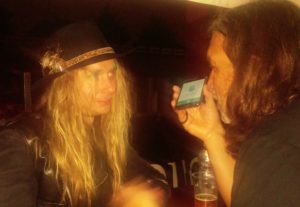 Maxx: Here we are for Rock On together with the new … ah, sorry, … old guitar player of H.E.A.T
DD: It is hard to say if I am the new guitar player or the old one.

Maxx: When did you leave the band? I don’t remember anymore.
DD: Like four years ago, or something. I think. But now I am back!

Maxx: Did you keep contact to H.E.A.T in those years? Did you listen to their music etc.?
DD: Yeah. I mean: H.E.A.T is in my heart. I was in the process of writing, also for „Tearing down the walls“. I jumped into the band two months before they went to record it. So I have been involved on that, as well. I didn’t had much contact with the guys. But with Jona, the keyboard player, yes – as we are childhood friends. When I was this tall (indicating with his hands the size – not more than one meter), we became friends. And so it just happened naturally.

Maxx: There were rumours that you were working with Lekremo, the previous H.E.A.T vocalist, as well.
DD: Yeah. I still do. We are actually writing on an album, me and Kenny. We are doing it since four years. We don’t know when it’s gonna be released, but we are working on it.

Maxx: Was your coming back to H.E.A.T planned before?
DD: No, it wasn’t. When I left the band I thought to myself that I never will come back. But than when I rejoined them I just felt: I wanna do this! I missed the guys, I missed the music, most of all, the songs and everything. I just love it.

Maxx: I think that tonight you felt again the atmosphere on a stage. Italy is far from Sweden but …
DD: … it seems so close! Tonight it was so good, quiet emotionally. I am not crying, I am not this type of guy. But – fuck man! I felt something special tonight that I haven’t felt in a long time.

Maxx: You were writing music – but have you also been on stage in the past few years?
DD: I have been performing in Sweden with different bands as a musician. I have been working in my studios and writing songs. In Sweden I have been doing some live stuff but nor for, like, hm … this is more as a musician not like a …

Maxx: Now that you came back, will you help them with the new album?
DD: It depends. They are only at the beginning. If they want my help on the songs, I guess, I am for it.

Maxx: I guess this will be one of the most important albums for H.E.A.T
DD: Yeah! „Tearing down the walls“ was a superb fucking album. It is great and God knows what is gonna happen now. I hope we’ll pull it through and do another fucking great album. Because this is what we do, you know?

Maxx: We are waiting for you to come back on stage with H.E.A.T too
DD: I am really looking forward to play with the guys, to record the new stuff, to write with them – that’s what I do. I love to write music, you know, hopefully it will get on an awesome album out there!

Maxx: So, once again: welcome back, Dave!
DD: Thanks from the bottom of my heart, Dude. 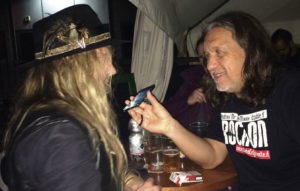