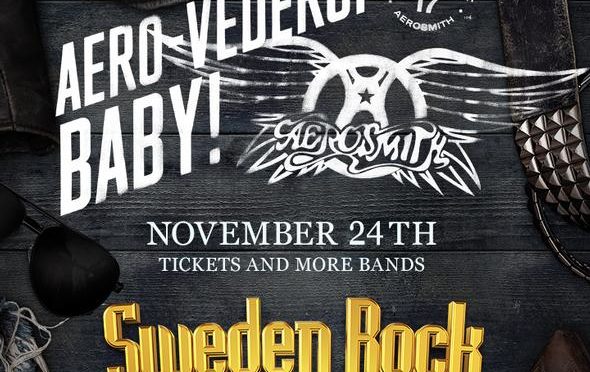 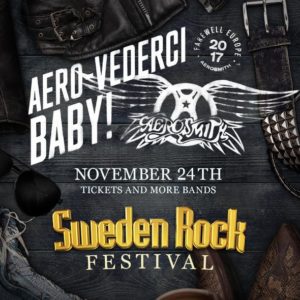 ::: ENGLISH VERSION:::
Today, the 3 and 4 day tickets for Sweden Rock Festival 2017 are being made available.

Boston’s Aerosmith return to SRF, it will be for the last time during their: AERO VEDERCI BABY World Tour

Steven Tyler (vocals), Joe Perry (guitar), Brad Whitford (guitar), Tom Hamilton (bass) och Joey Kramer (drums) will be Headliners at the next Sweden Rock. It will be emotional indeed when the SRF crowd bids one of their very favorite acts farewell.
Few could probably have guessed 20 years ago that a band from Gothenburg combining death metal with melodic 80’s heavy metal would one day be filling arenas the world over, but that is exactly what In Flames have accomplished. Their new album “Battles” was released just a couple of weeks ago and in 2017, Sweden Rock Festival will be their only Swedish festival appearance!
Running Wild have been in the major league of the heavy metal genre ever since their breakthrough 1987 “Under Jolly Roger” album, but live shows by the band have always remained scarce. In their native Germany, they have headlined the biggest metal festival in the world, Wacken Open Air, twice in recent years, but they have not visited Sweden since the year 2000. Next summer, the time is finally here though, as Rolf Kasparek and his crew steer their ship towards Sölvesborg!

All acts confirmed so far:

In Flames (only festival show in Sweden)

Running Wild (only show in Scandinavia)

Clutch (only show in Sweden)

Venom (only show in Sweden)

A total of 80 bands will be playing at the Sweden Rock Festival on June 7th – 10th 2017. More acts will be announced as they get confirmed.